Here are some ways that reading Montessori books has influenced our home.

This is Reuben’s personal care area, with a hairbrush, toothbrush, face sponge and mirror.  It’s in his reach so he can brush his hair/teeth as much and as often as he likes.  I don’t think he’s too young to have this at all.  He likes knowing where his things are kept and having access to them.  He has been cleaning his teeth with me since they first came through.  We do it together and I have always let him hold his brush and do it all by himself (before I then have a go).  He concentrates so hard to try and copy me!

Drinking from a glass

Reuben has been drinking from a glass from about 9-10 months old.  We use little shot glasses.  These photos are from 11 months old.  He still needs a bit of help but we haven’t had any broken glasses yet!  Beakers really aren’t good for a toddler’s teeth development, so this helps avoid that problem.  It also means that he can have a drink when his bottle isn’t around, and that he can feel independent and ‘grown up’.  He does still use a beaker when we’re out and about but I’ve noticed that he’s really been refusing it a lot recently.

We need to work on this one a bit, as we haven’t done it nearly as much as I’d like.  Artwork is hung at a height where the child can see it and enjoy it.  To be honest, we read a lot of books, with plenty of different illustration styles, so I’m not too worried about this.  In this photo a baby Reuben is practicing transferring a ball from one bowl to another.

Montessori suggests the use of mirrors to help babies move their limbs and make the connection between what they are feeling and what is happening.  Luckily when we moved in we had 2 huge wardrobe doors that were mirrored.  Reuben has always loved looking at himself!  I caught him sticking his tongue in and out just the other day.

Eating at a table and chair

Being hoisted into a highchair can be frustrating for a newly independent toddler.  That’s why we switched Reuben’s high chair for a small table and chair when he was 13 months old.  I know if he’s hungry because he goes and sits in his chair!  He is very happy to go there to eat, and I feel much happier knowing he’s at ground level  (he used to try and stand up in his high chair!).

He still eats in the high chair if we’re all eating at the same time, otherwise he’s at his table.  Actually, in the photo my plate is there too because I sometimes join him at his table.  There’s also a mini dustpan and brush hanging up – He wipes the table and then he uses that to sweep the floor after eating and then hangs it back up again.  I help him a lot with that at the moment, but he’s getting there!

Everything is a learning experience 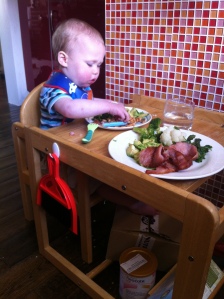 When we are at home, Reuben is able to come up and help me with whatever I’m doing.  I always try to include him.  He might help me get dressed (I ask him to find my socks), or he helps sweep the floor, or he loves (LOVES!!) helping with the washing.  Everything is a learning experience for him.  We get on with our separate activities throughout the day, but if he wants to then there’s always something we can do together.  In the photos below he has decided to come and help me change the batteries in his toy.  Instead of distracting him with something else, or putting him in a different room, I let him.  He loved handling the screwdriver and it was almost as though he understood this wasn’t a game.   He was very careful and precise and was happy the toy worked when we had finished! 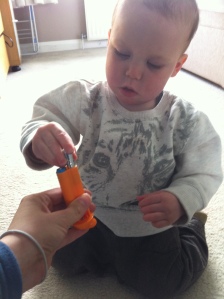 I’ve posted about this before here.  Put simply, it’s a mattress on the floor instead of a cot.  We love it as Reuben can be cuddled during the night if needed and in the morning he gets up and plays quietly without waking us up screaming!  It also means that transition to a toddler bed should go quite smoothly.  He is already aware that bedtime is bedtime, so will hopefully continue to resist playing with toys at bedtime.

Reuben has never been forced to be independent.  By that I mean that he is never put in a contained area apart from us eg. a playpen or his room.  He has complete freedom to walk around our home as he chooses.  He can also come to us as and when he chooses.

When he could first crawl, Reuben stayed on the rug in the lounge.  He was independent enough to move around and play alone but he lacked the confidence to explore further.  Gradually he inched away from the rug, exploring the rest of the lounge.  A few weeks later he was ready to go into the hallway.  It happened much slower than I expected, he was moving into new territory and further away from us when he was ready.  Gradually, over many months, he gained the independence and confidence to move further away from me and play in a different room.

Of course now he’s happy to run down the street away from me!!  He is not a clingy child at all, and is very happy to meet and be held by others.

If I had shut him in his room to play, or put him in a playpen then walked away, I would have been forcing him to be in a situation he wasn’t comfortable with or ready for.

Montessori said children should have activities presented in baskets or on trays.  I try and keep Reuben’s toys tidy by putting them into baskets too.  Every toy that has ‘parts’ has its own basket or tray.  Larger toys without parts are put into one big basket in the lounge.  This photo shows a themed basket – quite obvious what the theme is! 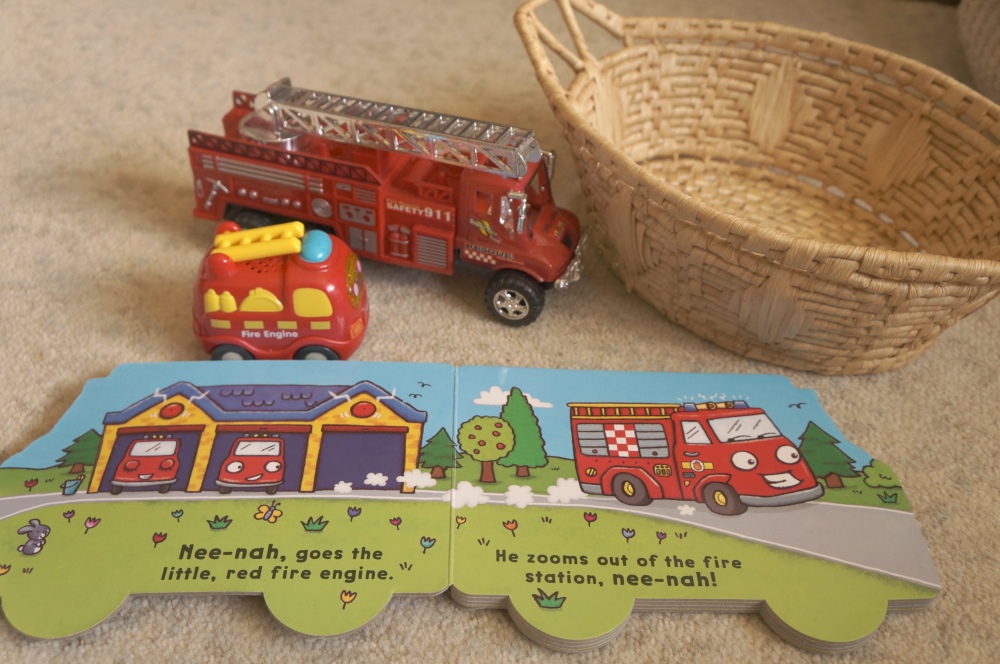 The Montessori principles have influenced my parenting style, as well as how we lay out our home.  We always try and think about respecting the child by allowing them to roam freely and putting anything they shouldn’t have out of reach.  We try and keep the home looking tidy, with toys being kept on low shelves that Reuben can reach.  Montessori says that the home should be ‘beautiful’ and full of ‘natural materials’.  We try to keep plastic toys to a minimum and try to let the things that Reuben plays with reflect real life.  I’m going to do a whole separate post on toys, as there’s lots to say about them!!